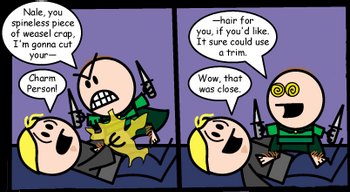 Charm Person is some kind of magic, supernatural ability, Applied Phlebotinum or Charles Atlas Superpower (achieved through impossibly high amounts of personal charm) that makes people want to do what you want them to do, especially the Weak-Willed. May or may not have obvious parallels with hypnosis, which is not anything like this in Real Life.

It's distinct from Compelling Voice because Charm Person can be resisted or broken out of, leading to "I Know You Are in There Somewhere" Fight and Intrinsic Vow moments and such. A good way to differentiate between the two is that Charm Person can never be used to force someone to do anything that would violate the target's moral code (for example, attacking one's king).

If the writers want to give The Hero mind control powers, this is probably what he'll get, because it's both the least powerful and least evil of all the versions of Mind Control.

Named after the magic spell "Charm Person" from Dungeons & Dragons and its many, many variants.

Despite what the title implies, this is not about a Charm Person. The effects of more powerful Charm Person spells or abilities may be compared with Love Potions and Glamour. See also Hypnotic Eyes, for a frequent way this power is implemented. Compare Politeness Judo.

Jafar has been hypnotizing the Sultan for years with his staff. To be fair, the Sultan was soft-headed to begin with.

Jafar has been hypnotizing the Sultan for years with his staff. To be fair, the Sultan was soft-headed to begin with.