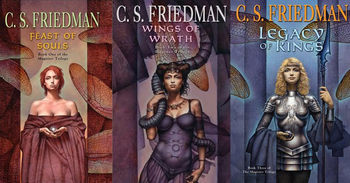 A trilogy of fantasy novels by Celia S. Friedman, known for her earlier work the Coldfire Trilogy. The Magister Trilogy books' titles in order are Feast of Souls, Wings of Wrath and Legacy of Kings.

The series takes place on an unnamed fantasy world, where magic is fueled by the power of human souls, or athra. Every time a witch casts a spell, it uses up a portion of his or her allotted lifespan. The exception to this rule are the titular Magisters, a brotherhood of magic users whose powers and lifespans are unlimited. They guard the secret of their power closely, fearing that the rest of the human population would turn against them if it was revealed.

The series focuses largely on Kamala, the first woman to successfully make the Transition and become a Magister. Other major characters are Andovan Aurelius, a young prince who has contracted a mysterious and uncurable disease known as the Wasting, Colivar, an ancient and powerful Magister, and Siderea Aminestas, the Witch Queen of the free state Sankara. The events are set against a backdrop of ancient enemies returning after thousands of years to threaten human civilization.