Manga / Ghost in the Shell 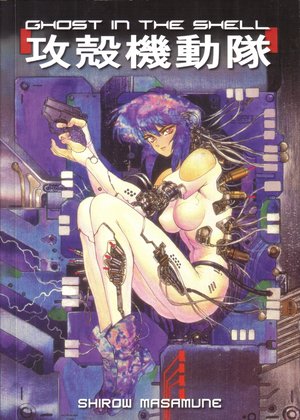 Ghost in the Shell (攻殻機動隊 Kōkaku Kidōtai, literally "Mobile Armored Riot Police") is a manga series written and illustrated by Masamune Shirow. The manga, first serialized in 1989, told the story of the counter-cyberterrorist organization Public Security Section 9, a cyborg SWAT team led by protagonist Major Motoko Kusanagi, in Post-Cyberpunk Japan. It would go on to become a franchise, being followed by two more manga series, GitS: Human Error Processor and GITS: Man/Machine Interface, and later being adapted into two animated films, an anime and an OVA series. The films, Stand Alone Complex and Arise are in different continuities.
Advertisement:

A live-action film, which used to be in Development Hell, was produced by DreamWorks and finally released in March 2017. Scarlett Johansson plays the lead role; it's directed by Rupert Sanders (Snow White and the Huntsman).

These manga provide examples of: