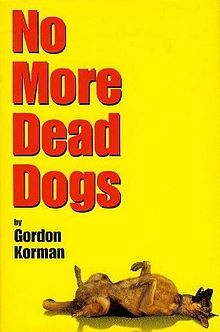 No More Dead Dogs is a 2000 young-adult novel by Gordon Korman.
Advertisement:

Wallace Wallace, eighth-grade football player, refuses to tell a lie, so when he is asked by his teacher, Mr. Fogelman, to review Old Shep, My Pal, he gives it a scathing review. Mr. Fogelman gives him an incomplete and holds him in detention until it's completed. In detention, Wallace is forced to attend rehearsals for the school play, which happens to be the stage version of Old Shep, My Pal.

However, Wallace is something of a celebrity due to having accidentally scored the winning touchdown in last year's championship game. He and Mr. Fogelman undergo the community's pressure to get Wallace back onto the bench. This is complicated by the fact that Wallace begins to like going to rehearsal, and even suggests improvements to the script.

Also, someone appears to be sabotaging the play, and Wallace is the main suspect...