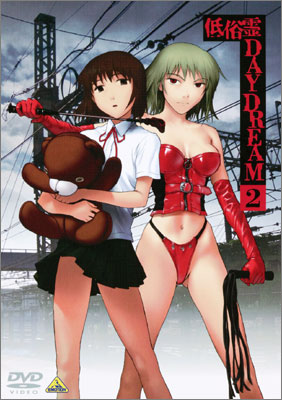 Misaki (right) and Ai (left).
Ghost Talker's Daydream (original title 低俗霊 Daydream, or Vulgar Ghost's Daydream) is a Shōnen horror manga with Ecchi overtones written by Saki Okuse and illustrated by Sankichi Meguro, which was serialized in Shonen Ace from 2000 to 2007 and collected into 10 volumes. It was adapted into a four-episode OVA series in 2004. The first six volumes have been released by Dark Horse Comics with more still to come.
Advertisement:

Her liaison with the organization is Souichirou Kadotake, a Non-Action Guy type who, despite a surprising proficiency in martial arts, is clearly in the wrong line of work, since he's scared of ghosts. She is also assisted by Mitsuru Fujiwara, a teenager with stalkerish tendencies, and Ai Kunugi, a shy high school girl with budding necromantic abilities of her own.

Misaki's dress accidentally gets ripped off by some dude.

Misaki's dress accidentally gets ripped off by some dude.