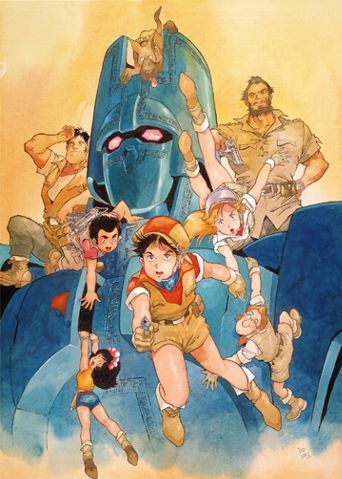 Gorg! I want to go on an adventure with you!
Advertisement:

Giant Gorg is a Humongous Mecha anime released in 1984 and directed by Yoshikazu Yasuhiko, who's most well known as the character designer for Mobile Suit Gundam.

Yuu Tagami was never close with his father. Yet after the old man's accidental death, Yuu finds himself on a plane to New York City, following instructions written in a letter from his late father. New York is as strange as it gets for the boy from Japan, but stranger still is Dr. Tom Wave, the man he's supposed to meet. Dr. Wave shares an obsession with the deceased concerning the mysterious New Austral Island. Ten years ago, the island sprang into being, and then just as suddenly vanished off the maps. But it's still there, and Dr. Wave knows there are secrets on that island that demand investigation. Unfortunately, he isn't the only one! The corporation known as GAIL wants those secrets for themselves, and they're willing to kill to get their way! What secrets lie on New Austral Island?

One of the notable things about Giant Gorg is that it's a "Super Robot" show with a twist. While it does have some elements of the Super Robot Genre (Gorg is sentient, and friends with Yuu Tagami), it has more tropes associated with the Real Robot Genre (Gorg has no super powers, and the show has a heavy Military presence). This makes Gorg one of the few examples of a "Super Robot with Real themes", whereas usually (especially nowadays), it's the other way around. The twists are largely thanks to the show's head writer, Masaki Tsuji, a novelist and award-winning screenwriter with anime credits dating back to Astro Boy.

At present the series is also available to stream on Amazon Prime in America.

Tropes asociated with Giant Gorg are: