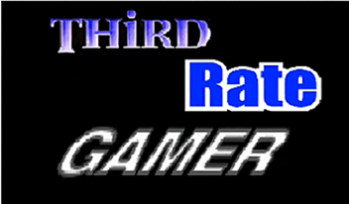 "Didn't they test this game before they released it?"

is a Stylistic Suck satire of the infamous Irate Gamer, by FFL2and3rocks (real name unknown).

Similarly to other Irate Gamer parodies such as the Save State Gamer and The Irritated Gamer, the Third Rate Gamer does intentionally poorly-written and acted reviews of various games, usually with deliberate references to some of Chris Bores' well-known memes and mistakes.

The first episode, a review of Final Fantasy 3, was released in 2007, and has garnered enough positive feedback from fans to spawn 17 more in total. The last episode (and last video on the channel) was released in 2011, with the show seemingly cancelled due to "lack of motivation" by the creator. Longtime fans eagerly await an eventual comeback episode, if such a thing ever happens.