"This show does not even attempt to tread new ground!"
-Save-State Gamer, from his Fallout 3 reviewnote Referring to his "Save-State Gamer Neo" show, but his statement would certainly apply to the whole show 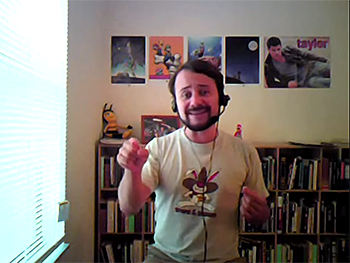 "Well howdy, fans, and welcome to another edition of the Save-State Gamer, coming to you live from via sattelite!"
Meet Crisbo Herrs: an inept video game reviewer with absurdly poor gaming skills, an inability to do research, a considerable ego, and a deep admiration for the Angry Video Game Nerd.
Advertisement:

. The show is one of various parodies of The Irate Gamer, such as the Third Rate Gamer and the Irritated Gamer; the Save-State Gamer's videos use Stylistic Suck as their driving force, with various jokes being direct parodies of jokes from the Irate Gamer's reviews.

Each of his videos have been compiled into this playlist