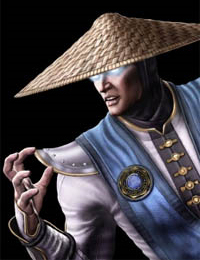 Even Asian gods wear them!
Advertisement:

The conical Asian hat (also known as a sedge hat, rice hat, coolie hat, non, or paddy hat) is a simple style of conical hat originating in East and Southeast Asia, particularly Indonesia, The Philippines, Vietnam, China, Japan and Korea — many far-East and Southeast Asian countries have their own variation on it, and their own name for it.note Caping, Salakot, Nón lá, Dǒulì, Sugegasa, and Satgat, respectively. This style of hat is used primarily as protection from the sun and rain, and is usually kept on the head by a cloth (often silk) chin strap; an internal band of the same material keeps the hat itself from resting on the wearer's head. While anybody can wear the hats, in China, they are primarily worn by women who work on farms or in fields for hours on end.note It helps preserve the white in Raven Hair, Ivory Skin. And a variation of the conical straw hat which is painted in bright fluorescent yellow can be seen by street cleaners in major Chinese cities. As late as 1950, and the fall of Hainan, this hat had military applications as it was pretty much the only standard-issue garment the Guomindang could afford to waterproof. The Communists on the other hand used Soviet-style waxed greatcoats and eschewed the "backward" and "feudal" image the hat conjured up (though none of their men actually got any until after they'd won the war and crushed all the labour-unions).

Farmers (especially rice workers) tend to wear them more often. Although in Korea, they are primarily worn by Buddhist monks.

In feudal Japan, the ashigaru, the footsoldier class who supported the samurai, wore a reinforced and militarised form of this hat, with a hanging kepi-cloth to protect the neck from sun and rain, as the trademark of their military caste. This was called jingasa (war hat), and was made either from metal segments riveted together, or from very stiff waxed leather. It offered such a reasonable protection from arrows, the main threat for the ashigaru on the battlefield, in a light and comfortable way, so that even some samurai wore them instead of heavy and cumbersome kabuto helmets. It was especially popular among the horseback messengers, who even invented a specialized form called bajogasa, "rider's hat".

In fiction, there are many Asian characters who wear conical hats... simply because they're Asian. Regardless of whether or not it makes sense for the character to be wearing such a hat, if they are Asian, they will be seen wearing one to allow viewers to recognize that they are in fact an Asian character.

A related trope is Lampshade Wearing: for a long time, in any remotely comedic western work, if a character was left in a room with a conical lampshade, you could almost guarantee that he would try it on and imitate a Chinese accent.