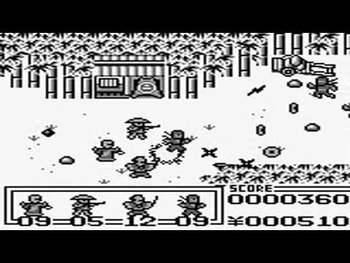 Mercenary Force (Japanese title Tenjin Kaisen) is a Game Boy game released in 1990 by Meldac. Mercenary Force is a Shoot 'em Up but unlike many other genre entries, it's set in feudal Japan and, rather than just one shooter, you have a party of four shooters (more on that in a moment).

According to the manual, the game is set during the Tokugawa Shogunate. The shogun has recruited a force of mercenaries to defeat the Lord of Darkness who has taken over the land with his evil minions. Taking place over six levels with Ratchet Scrolling, you must choose a party of four characters from five available choices. Each character has different starting health, attack power and a special "Transformation", which does a lot of damage to enemies but costs the character's life. Your choices are:

While you go through levels shooting up Mooks ranging from human foes (samurai, ninja, etc) to animals and mythical creatures, more gameplay elements set this title apart from your typical shoot'em up. During the game, your party of four can take on four different formations: Formation of the Forest, Formation of the Fire, Formation of the Wind and Formation of the Mountain. Each formation has different strengths and weaknesses based on the terrain, how many foes you face, your own party and even their marching order. You must choose wisely throughout the game which of these formations to use, when to switch and how to position your characters. Another challenge is money management. You start out with a small sum of money to buy mercenaries at the start of the game and must collect coins from dead foes as you progress. This money is needed to buy new mercenaries in between levels to replace the dead ones and also to buy restoring items at the cafes you'll pass throughout the game. You have to make sure to not only collect money as you go along, but choose wisely on how to spend it.

Not to be confused with actual mercenaries or the movie Merc Force. Compare Kiki Kai Kai, a similarly themed shoot'em up set in ancient Japan.