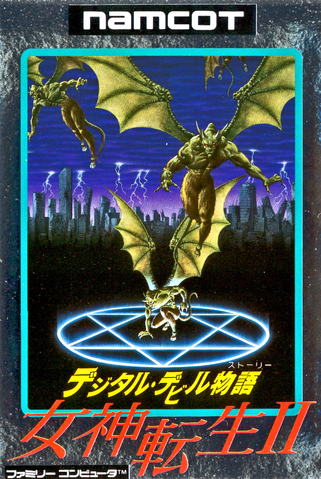 In the year 199X, the world was thrown into nuclear war and Tokyo was hit by a missile strike. During the resulting chaos, a horde of demons from Makai managed to launch an invasion of the human world, pretty much conquering it. Cut 35 years later, where various demon lords fight it out for control of Tokyo, and humanity struggles to survive in the ruins of the city and the bomb shelters where they fled years before. In one such bomb shelter, a young man and his friend come across the sealed demon Pazuzu while playing a mysterious game known as "Devil Busters". Pazuzu, claiming to be a servant of God, declares the two as the Messiahs who will save humanity from the demons and grants one with the Demon Summoning Program that will allow him to talk to, and recruit, the demons, and teaches the other magic. Shortly afterwards, however, the bomb shelter is attacked by demons and the two are thrust out into the ruined, demon infested world.

The game follows three primary human characters. None of the characters are given official names, and must be named by the player.

Like its predecessor and successors, Megami Tensei II is a first person dungeon crawler using a turn based battle system, and the bulk of the player's party will be made of demons who they recruited. However, demons cannot level up on their own, and must be fused together to form stronger demons. Unlike the map and cursor overworld used by later games, there is a full overworld between dungeons, complete with overworld sprites for the three human party members. Like most main Shin Megami Tensei games, the game ends if both human party members are killed.

During the era of the Shin Megami Tensei sequels, the game was remade alongside the first game as Kyuuyaku Megami Tensei for the Super Famicom. Aside from graphical updating, the remake introduced several new demons.