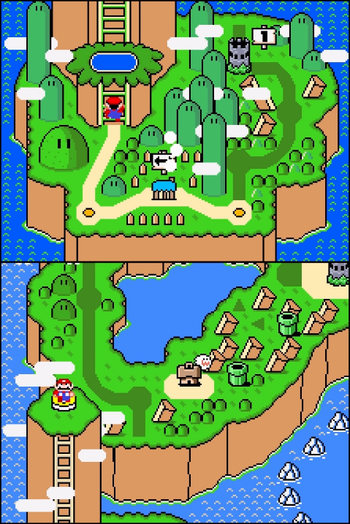 You'll cross that bridge when the time comes.
"Hey! Do you know what you just did? You've taken your first step into KANTO. Check your POKéGEAR MAP and see."
— Pokémon Gold, Silver, and Crystal
Advertisement:

You're playing a nonlinear game. You find a door. You go through the door. You're now greeted with awesome new, adrenaline-pumping music, a whole new set of tiles and graphics, and weird enemies unlike any you've ever seen before. Except all those goodies are trapped behind a wall, and you don't have the key to open it yet, or the ability needed to make it through the first room. Or maybe you just stumbled onto a Door to Before from the wrong direction. You can't go anywhere! It was all a tease!

Done frequently in older games, sometimes just as a result of one map needing to borrow some space from another map, and showing you the new graphics and music for that other world in the process long before you're even supposed to explore it. But what it does do is give you a memorable impression of that new area and make you want to go there. If you're lucky, you might be able to treat this limited area as a Peninsula of Power Leveling and fight some Random Encounters for fun and profit.