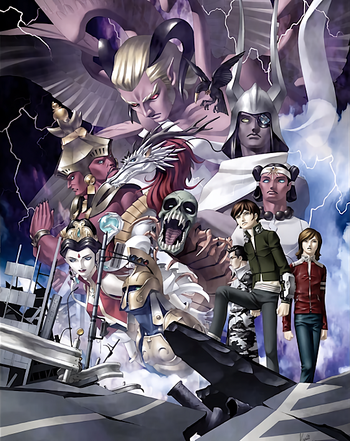 The Hero, his friends and The Legions of Hell.
199X, Tokyo
As the devil known as "desire" grows, anxiety born from uncertainty has brought forth the teachings of "Gaia", which espouses the birth of a new world from the ashes of the old; and the "Messiah", acting on behalf of God.
What is it that people seek? To create a millennial kingdom of order ruled over by God as promised by the Messiah? Or the destruction of God's kingdom, and with it, the birth of a world of chaos?

...or perhaps...
— Opening narration from the Sega CD version
Advertisement:

The first game in the Shin Megami Tensei JRPG series, and Spiritual Successor to Megami Tensei. It was released in Japan in 1992 for the Super Nintendo and later released for the PC Engine Super CD-Rom and Sega CD. Remakes for the Playstation and Gameboy Advance came out in 2002, which was eventually ported to iOS in 2012note Though it no longer works with the current operating system, and Atlus has shown no interest in updating it. It later got a direct sequel in Shin Megami Tensei II.

It's a fairly average day for you in Tokyo, aside from the vaguely prophetic dream you had the night before. The dog needs to be walked, your mother wants you to run down to the cafe and pick up some coffee, and you received an email claiming that a portal to Hell has been opened and that demons are invading the world.

Things quickly go from bad to worse as Tokyo is placed under martial law and you are thrown into jail accused of murder. Your only weapon against the ensuing chaos is a Demon Summoning Program: a mysterious piece of software that allows you to converse with and bind demons to your service. Soon you manage to meet up with the allies you saw in your dream and La Résistance, learning that not only is a Japanese general attempting to use the demons to commit a coup-d'etat, but America is threatening to "solve" the demon crisis by dropping a dozen nukes on the city. However, all is not as it seems, and soon Tokyo has been destroyed as part of a greater scheme.

This is only the beginning.

The real meat of the game takes place thirty years After the End in the ruins of Tokyo. Two factions are trying to create a new world in their image: first, the Messians, whose goal is to establish a Thousand Year Kingdom of God under the (rather unforgiving) guidance of the angels. Opposing them are the Gaians, who wish to return the world to a primal state of anarchy with the demons. Having been thrown forward in time to escape the destruction of Tokyo, you must now become The Kingmaker and decide just what shape the world shall take.

The first four main characters have no default name; however, they were later given a number of "official" names:

Shin Megami Tensei is a first-person dungeon crawler much in the same vein as the RPGs of its time, such as A Bard's Tale or Wizardrynote in fact, the early Megami Tensei games in general seem to take a lot of their design beats from Wizardry IV, what with recruiting monsters, limited numbers of human heroes, and very complex dungeons. It uses a turn-based battle system, though you are given the option to talk to a demon before you battle to see if you can endear yourself to it. By winning the favour of a demon, you can ask it for money, items, healing or to join your party. However, demons do not gain experience points so the only way to strengthen your party is to fuse two or more demons together at the Jakyou Manor, creating vastly more powerful demons that can exceed your own level.

Your Character Alignment is a huge focus of the game. Depending on the choices you make, the demons you recruit and the missions you accept, the main character's alignment will change to Law, Balance or Chaos. This mainly affects the ending you receive, but also affects what demons you can recruit (Law demons will refuse to join you if you are Chaotic and vice versa), what items you can equip and what healing stations that you can use (each faction has its own healing station; using an opposing faction's healing station will cost you more). There's no "right" path to follow- in fact, the game strongly encourages the player to find their own philosophy and treats you as the hero no matter what side you follow, if any.

The graphics aren't that great and the game itself is Nintendo Hard. It also suffers from some baffling design choices, like having to go through three menu screens to access a sorely-needed minimap. But it was a revolutionary game for its time: in an age where seemingly every RPG was linear, had little plot and was stuck in the medieval high fantasy genre, Shin Megami Tensei had a wide, sprawling overworld where you could do what you wanted, delivered a truly outstanding plot for its time and was a radical post-apocalyptic Urban Fantasy.

The game never got a release in the West, but a group called Aeon Genesis has released a translation patch for the SNES ROM; a second patch by a modder called Orden was released, fixing some of the bugs in the Aeon Genesis patch and making some translation changes to get the script more in line with the official translations. However, an English version was made available on the iOS app store on March 18, 2014. Although technically, the Japanese version was available worldwide on the iOS app store for a while until it was apparently region locked, with the description reading that the game would never get an English translation. Unfortunately, it is no longer compatible with current OSes, with Atlus not appearing interested in updating it. Not to let the work on the official translation go to waste, another modder called Gymzatan ended up back porting the iOS script to the GBA version.