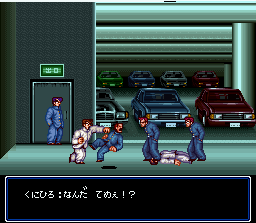 The story involves Kunio and his classmates going on a field trip to Osaka after the end of his second year in high school when they were invited by an exchange student. However, during their trip, they run into the Osaka Student Union, who are up to no good. After rescuing Miho, a friend of Hiroshi's, she said that the schools in the city are taken over by the aforementioned group and they want to take over the rest of Japan. It is up to Kunio to put a stop to this.