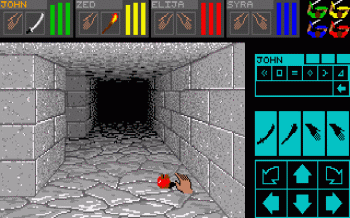 A common technical solution in early Adventure Games and Role-Playing Games from the late 1980s and the early 1990s, before Polygonal Graphics were advanced enough to develop a true 3D experience.

As the player characters wander through a dungeon or walk along the city streets, the player sees the corridors in a first-person perspective. However, the view isn't truly rendered in 3D. Rather, it is composed of multiple algorithmically assembled 2D building blocks; to render the view, the game appropriately arranges these images on top of pictures that depict the floor and ceiling. Sometimes, enemies and items present are overlaid as sprites. Early on, the walls were black-and-white wireframe, or filled with a uniform color.

This differs from games where each individual view is basically a single image, like the first Myst, or games that have each node as a single panorama, like the third Myst or Google Maps Street View.

In games that use this, the player moves from cubic node to cubic node of an Invisible Grid. All walls are orthogonal while all ceilings and floors are the same level.