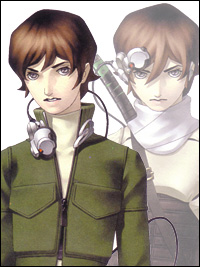 The Hero is an Ordinary High-School Student living in Tokyo with his mother. He receives the Demon Summoning Program in an email and discovers a remarkable talent for Summoning. 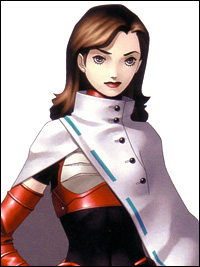 The Heroine is the leader of an underground resistance movement against Gotou. Although she cannot use the Demon Summoning Program, she has incredible magic powers. She eventually becomes the main companion to the Hero.

She saves the Hero, Law Hero and Chaos Hero from the end of the world by teleporting them to Makai and is killed in the Great Destruction. She is reincarnated years later and (incorrectly) declared the Messiah by the Messians, but is captured by Ozawa's forces and put under the control of the Psycho Diver, who (under coercion from Ozawa) implants a demon inside her mind that slowly consumes her from within. Her psychic cries for help damage the Hero during each Full Moon until she is rescued. 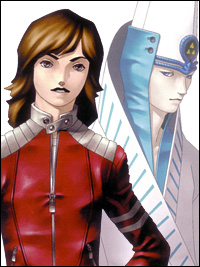 A young man who meets the Hero while searching for his girlfriend (who coincidentally shares the name of the Heroine). He survives the end of the world and gravitates towards the message of peace broadcast by the Messians.

He saves the Hero in a Heroic Sacrifice and is reincarnated by divine power into the Messiah, The Chosen One of the Messians. Although he begins as a kind and well-intentioned soul, his viewpoint is poisoned by the Knight Templar angels until he becomes just as radical and unforgiving as they are. He dies in every route: slain by Chaos Hero in the Law route, and by the Hero in the Neutral and Chaos routes. 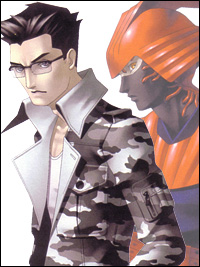 A young and reckless gang member who is first met while he is being beaten up by Ozawa. Although he talks big, he is cowardly and wishes for the power he does not have.

He survives the end of the world and eventually decides to fuse himself with a demon, gaining incredible power and ditching the Hero. He then joins up with the Gaian armies in his pursuit of more power, though remains somewhat affable with the Hero. In the Law and Neutral routes he is slain by the Hero. In the Chaos route, he is killed when he greedily snatches a powerful artifact called the Devil Ring from the Hero, and is consumed by its power. 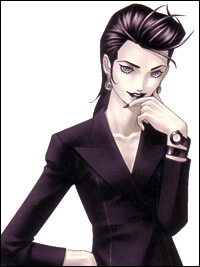 An alluring young woman aligned with Gotou who pledges eternal allegiance to the Hero. For this reason, she is incredibly jealous of the Heroine.

Her true identity is Lilith, the biblical serpent that tempted Adam in the Garden of Eden. Believing that the Hero is the reincarnation of Adam, she wishes to be his partner so that they can create a new world together. She is killed by the Hero in the Law and Neutral routes, but steps aside in the Chaos route so that the Hero can be happy alongside the Heroine. 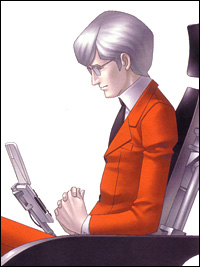 The wheelchair-bound genius who created and distributed the Demon Summoning Program. He was also the inventor of a teleportation system that inadvertently opened a portal to the underworld, setting off the events of the game and the rest of the franchise. He thus makes several appearances in future games. 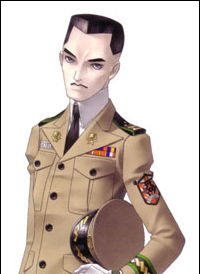 Commander of the Japanese Self-Defense Force who attempted a coup d'état. 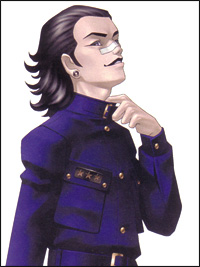 A Jerkass gang leader. He turns out to have a remarkable talent for Summoning and allies himself with Gotou.

He survives the end of the world and strikes a deal with the new demonic regime so he can rule over the district of Shibuya. After Chaos Hero fuses himself with a demon, he kills Ozawa out of revenge.

After demons begin to appear in the streets of Tokyo, the player can go to Inogashira Park and meet an old man who speaks cryptically of the hero gaining great power and of a choice between Law and Chaos. He then conjures up a vision in which the hero, Law Hero and Chaos Hero fight against the devil summoner Douman and are soundly defeated. The vision ends and the old man tells the hero that he is too weak to fight Douman, but that they will likely fight again and that he must be careful.

After arriving in the post-apocalyptic world, the player can find the same old man in Ginza, where he will tell the player to return if no path forward seems possible. If the player then slays both Echidna and Haniel, the old man will reveal a secret path to the otherwise inaccessible Cathedral.

Near the end of the game, as the player prepares to battle Archangel Michael or the Asura Lord/Ahura Mazda, the old man reveals himself to be 太上老君 - shortened in the AGTP translation to Taijorokun (it should be Taijo-rokun, or Tai Shang Lao Jun) and officially translated as Taishang Laojun. After both are defeated (at the end of the Neutral path), he appears in the ending to comment on the risks that the plans of Law and Chaos posed to the future of humankind, and urges the player to help shape that future free of the influence of outside forces.