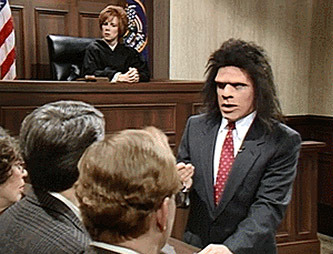 This courtroom is totally unfamiliar to him.
"Ladies and gentlemen of the City Council, I'm just a caveman...your world frightens and confuses me. When I see your tall buildings and flashing neon signs, sometimes I just want to get away as fast as I can, to my place in Martha's Vineyard. I'm more at home hunting the woolly mammoth than I am hunting a good interior decorator. And when I see a solar eclipse, like the one I went to in Hawaii last week, I think 'Oh no, is the moon eating the sun?', because I'm a caveman...but there is one thing I do know. The new resort housing development proposed by my partners and myself will include more than adequate greenbelts for recreation and aesthetic enhancement. Thank you. (smug grin)"
— Cirroc, The Unfrozen Caveman Lawyer, Saturday Night Live
Advertisement: