Schoolyard Bully All Grown Up 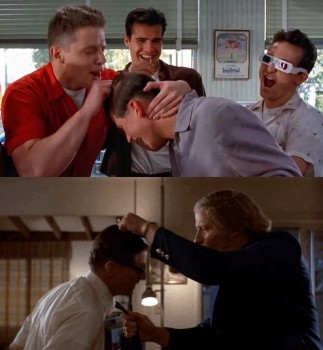 "HELLOOO!!! HELLOOO!!! Anybody home?!?! You thought things would change after 30 years? Think, McFly, think!"
"It's fun to laugh at the nerds. That's how I spent most of my time in high school!"
— The Producer, Screen Rant Pitch Meetings, The Big Bang Theory Pitch Meeting

You're The Hero about to face off with the Big Bad. Then the Big Bad removes his mask to reveal... he's that big kid who kept stealing your lunch money when you were in third grade. And now he's all grown up and wants more... apparently, that's what this whole conquering the world thing is about.

The Schoolyard Bully All Grown Up comes along when that character who made your life hell when you were in school grows up into a more formidable adult antagonist. If you were in grade school with him, then he was the Mouthy Kid. If you were in high school with him, then he was probably the Jerk Jock. If he is a "she", then she was the Alpha Bitch. Either way, the character hasn't matured one iota, but can now do a lot worse damage.

An alternate version is someone who wasn't quite a bully but still holds a grudge against you for something you did back in school. ("Remember when you took Cindy to the High-School Dance? That should've been me! Meet my Death Trap!") The Schoolyard Bully All Grown Up will hate your children for absolutely no reason, even if they're nothing like you. Somewhat cruelly, this character seems especially likely to become one of your kid's schoolteachers. If the story is told from the children's perspective, then all this will be a backstory.

Often a result of the fact that Everyone Went to School Together. A previously established villain may be revealed to be one of these when Spinoff Babies are created.

Sometimes, but not always, these types of characters are accompanied by the same people they were friends with, when they were younger. If this is the case, these friends will likely take the role of The Dragon.

And if the hero is an Anti-Hero (or just particularly resentful for what the bully put them through in the past) and is giving the bully-turned-bad guy a serious beating, expect him/her to enjoy the beatdown they're giving and say something like "You have no idea how long I've wanted to do that" or something to that effect.

Sometimes subverted by having the one-time bully growing up into a sensible, responsible adult who holds no ill will towards his schoolyard nemeses, something which sometimes happens in real life. This can also be subverted by having the adult bully becoming a friend to the former victim, even if they haven't necessarily grown up.

For the heroic counterpart, see Kid Hero All Grown Up. May intersect with But for Me, It Was Tuesday, where the bully doesn't recognise or even remember The Hero. Not to be confused with the other type of all grown up now. See also Kids Are Cruel.