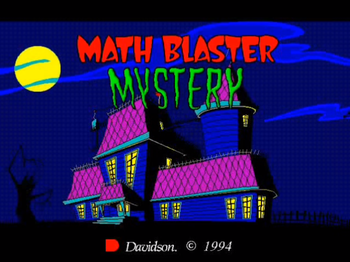 The scariest part is that it's full of word problems.
The Blaster Mystery series is a kind of Spin-Off to the larger Blaster series of Edutainment Games. While the original Math Blaster teaches basic arithmetic to elementary-aged children, Math Blaster Mystery teaches pre-algebra to somewhat older kids. Blaster Mystery later expanded into covering language arts for the same age group.
Advertisement:

These games take place in a different universe from that of the Blaster Pals. Trading the "space" theme for a "spooky" theme, they focus on Rave, a little green creature with a yellow horn growing out of his head, as he battles Dr. Dudley Dabble, a Mad Scientist who lives in a Haunted House. Most of the inhabitants of this world appear to be monsters and/or creatures of some description, with the odd exception of Dr. Dabble, although he does have blue skin at least. While generally unrelated to the original universe, there was a readable crossover story featured in Reading Blaster 2000 titled Dr. Dabble's Revenge, wherein the Blaster Pals fought against Dr. Dabble.

Games in the Blaster Mystery series include:

As part of the Retool that the entire Blaster franchise received in 1999, the Blaster Mystery series was apparently retired. A very In Name Only version of Dr. Dabble appears in an episode of Blaster's Universe, where he's now part of the Blaster Pals' Rogues Gallery, but that's it.