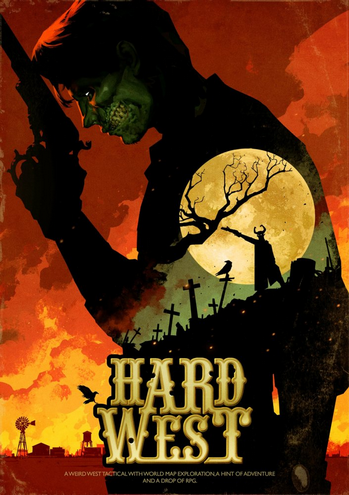 Hard West is a Turn-Based Tactics game by CreativeForge Games for PC, PlayStation 4, and Xbox ONE, released in November 2015. The game is set in a Weird West universe, following the story of Warren and his father, as well as other protagonists who intervene in secondary story arcs.
Advertisement:

The game includes elements of exploration and RPG. Using a worldmap, players advance the plotline by moving the party between points of interest. Reaching them triggers Story Branching dialogs, which can either benefit or harm players, such as new party members or items. Each scenario has its own gameplay quirks, which usually alters this sequence in some way.

The combat sequences are turn-based, similar to those of XCOM: Enemy Unknown. Each character has two actions per turn (moving, reloading, shooting, using an item or an ability), using most weapons at the beginning of a turn consumes both action points, with parts of the scenery providing cover. Each character can carry two weapons, two consumables, and one trinket giving a permanent bonus, enemies have an overwatch mode. The combats also have more original elements. Each party member can equip up to five poker cards, which grant stat boosts, as well as either active or passive abilities. Some sequences start with the enemy being unaware of your presence, which allows one to position the party for an ambush.

Hard West's campaign is divided in eight scenarios, which themselves could be loosely divided in three story arcsnote the scenarios themselves receive their official names; the arcs aren't named ingame and can only be inferred from the storylines' branching and the order each scenario is unlocked at completion of the previous ones.

Warren and his father – the main arc

As Good as Dead

On Earth, as it is in Hell

The Doctor, the Inquisitor, and the Seer

The first scenario of the arc is unlocked at completion of As Good as Dead.

A Matter of Time

This scenario is unlocked at completion of As Good as Dead.

In Gold We Trust

Silver Lynx Games funded Hard West The Board Game through

has been announced. The prologue is free-to-play.