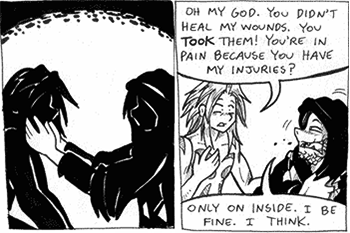 Even his grammar took damage.
"Your agony shall be my burden."
— Orion, Atlas Reactor
Advertisement:

A person who can heal other people's wounds by taking them onto themselves. Oftentimes when they heal someone else, they get the exact same injuries or ailments. Sometimes, though, they just get really sick or feel great pain. The point is healing others causes them to feel pain or sickness themselves, making it a real sacrifice every time they heal.

Expect there to be one point when they have to decide whether or not to heal someone with definitely fatal injuries. See also Sacrificial Revival Spell.

A Sub-Trope of Equivalent Exchange. Can sometimes be a White Mage, but doesn't have to be.

May be inverted for a more villainous equivalent — healing yourself by transferring your wounds to an enemy.