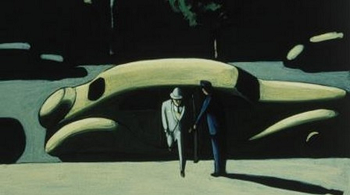 Whenever anyone, or anything, stands between the light and a surface, you get a shadow.

Except for these characters.

It may, like a vampire's lack of reflection, indicate the character is not what he appears to be — down to and including that he's a copy of the real thing, or even just an illusion. It may show that someone stole his shadow. It may indicate that, Casting a Shadow, he has animated his into a Living Shadow, and it's elsewhere, or even that he's a Living Shadow himself. But it definitely indicates something uncanny's going on.

Does not, of course, include those where the medium or artwork ensures that all characters and objects have no shadows.

Don't ask what's supposed to happen if you look at a bright light source with these guys blocking it—nobody knows!

A Sub-Trope of The Shadow Knows, more cryptic than the usual ones, where the shape gives a clue what the issue is. (Unusual shadows belong there, along with the inversion where an invisible character casts a shadow; this covers only a total lack.)