Literature / A Night in the Lonesome October 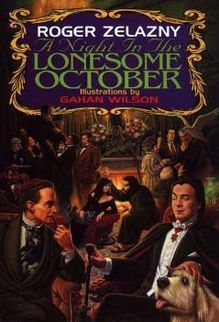 A Night in the Lonesome October (1993) is one of Roger Zelazny's last novels, illustrated by Gahan Wilson.

In an October in the late 19th century, a small English village finds itself host to an eclectic group of visitors. They are players in the Game, and on the final night of the month they will declare their allegiances and take sides in a contest that will determine the future of the world. Until then, there are mystic artifacts to locate, rituals to complete, potential allies to court or enemies to incapacitate (cautiously — for appearances can deceive, and a person whose allegiance seems obvious may be working for the other side, or may indeed not be a Player at all). Not to mention complications to deal with, including a mysterious American with an interest in botany, a famous detective with his suspicions roused, and a Player aiming to grab power through methods even his (or her?) allies might balk at...

, as well as the Russian Adventure Game Sherlock Holmes: The Return of Moriarty