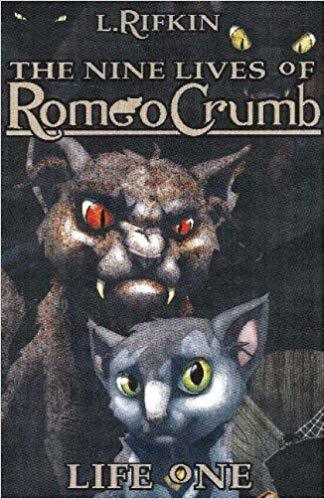 The Nine Lives of Romeo Crumb is a series of fantasy adventure novels by L. Rifkin taking place in New York City, where the feline-run streets are sharply divided by the domestic cat ("Stick") and the alley cat ("Alley") population. Within it, a young cat — Romeo — is adopted by a little boy named Dennis Crumb and meets a cat on the other side of the street, Queen Elizabeth. She generously shows him to the "Factory", where domestic cats have refuge from the streets and kittens can learn how to read, write, and survive in the wild world of New York. All the while, Romeo is also looking for his long-lost brothers and there's a berserk devil-cat out to get him.

Throughout its course, the series maintains a surprisingly dark tone (with even a few swear words in the mix).

The Nine Lives of Romeo Crumb provides examples of the following tropes: