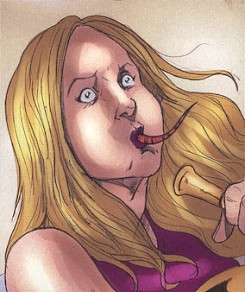 It sucks to be on the tail end of this.
Mariana: Don't pee in the water.
Beck: Why?
Mariana: A candiru, a vicious parasite will swim up the urine into your pau.
Beck: Swim up my what?
Mariana: Your pinto. It'll swim up your ding-dong. And once it gets in, you can't get it out.
Beck: (stammers) Well, then what?
Mariana: They have to amputate.
Beck: (closing his pants really tight) Not this boy's pinto. Uh-uh. Not today!
— The Rundown / Welcome to the Jungle
Advertisement:

A creature basically forces all of itself into someone else, but through an established opening of the body (as in naturally, not a cut or piercing), even if it's not really an opening (like the navel). It could be the mouth (do not confuse with Force Feeding, but it can overlap with Attack the Mouth), the nostrils, the ear, or through orifices below the belt. Pores could even count.

Effects on the victim can range from mind control to transformation, and even death.

Sometimes an orifice evacuation implies that is how it came in, even if that isn't stated.

A Super-Trope to Kill It Through Its Stomach (in that the invaded thinks it's just eating the invader).

Contrast Orifice Evacuation (where something leaves a body through an orifice), Chest Burster.

Not to be confused with Alien Invasion (although these can overlap).