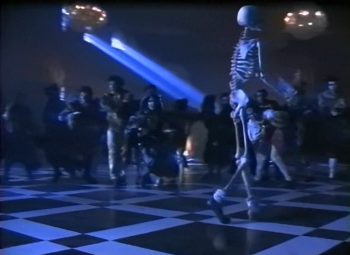 Michael Jackson's Ghosts is a 1997 Short Film (at 39+ minutes, the third-longest music video to date according to the Guinness Book of World Records, current contender is the 117-day-long music video for "Level of Concern" by Twenty One Pilots) directed by Stan Winston, produced by Michael Jackson, Stan Winston and David Nicksay. Mick Garris's screenplay is based on a story hashed out by Jackson and Stephen King (loosely based according to King).

The short is an allegory for the child molestation accusations leveled against Jackson, and the resultant scandal, over 1993-94. The mysterious "Maestro" (Jackson) has secretly been telling ghost stories and performing magic tricks for the young boys of nearby Normal Valley, but when one of the boys tells the adults of the town about it, they form a Torches and Pitchforks mob led by their Mayor (Jackson again) to run the "freaky" stranger out of town. Maestro responds by trapping them in his Haunted House with him and unleashing a parade of ghouls and dance numbers...It can be found here.