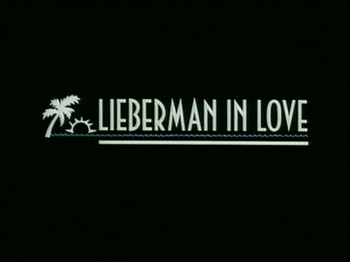 Lieberman in Love is a 1995 short film (barely, it got under the 40-minute AMPAS cutoff by thirty seconds) directed by and co-starring Christine Lahti.

Joe Lieberman (no, not the former Senator!) is a 50-year-old widower, picking up the pieces nine months after his wife died. He's also rich enough to spend an apparently indefinite amount of time in Hawaii and say "price is no object" when shopping for Hawaiian condos.

Joe (Danny Aiello) is in fact spending an indefinite amount of time when he approaches Shaleen (Lahti) at the hotel bar. Shaleen says politely but firmly that her time is expensive—in other words, that she's a prostitute. Joe is retreating in embarrassment when Shaleen points out that he was going to spend money on her anyway in hopes of sex: instead of spending the money on a fancy dinner for two and wine, why not just pay her directly and be sure of sex?

So he does. In fact, he becomes one of her regular clients. Joe, apparently wealthy enough to retire to Hawaii at age 50, starts shopping for condos. His real estate agent is a golden-haired beauty named Karen (Nancy Travis). Joe finds himself falling for Karen, but Karen is married. So Joe enlists Shaleen the hooker, paying her fifty thousand dollars to seduce the husband and break up Karen's marriage.

Based on a short story by W.P. Kinsella, who also wrote the novel that was the basis for Field of Dreams. One of only three films directed by Christine Lahti, who spent most of her career as an actress on TV shows like Chicago Hope.