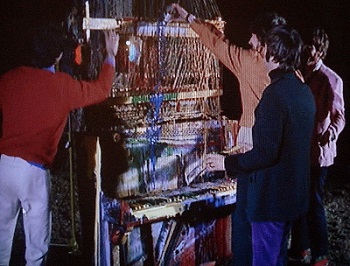 This type of music video, rather than featuring the band performing the song, is presented as a visual narrative. These can be original stories, homages to a favorite TV show or movie, or anything else the performer or director comes up with. The video can also directly relate to the story of a Concept Album.

Concept Videos are a signature of the early-'80s "Golden Age" of MTV.

Often these make use of Talky Bookends.

Compare with Lyrics/Video Mismatch, where a music video has an actual narrative, except that the story is different or even not related to the lyrics.