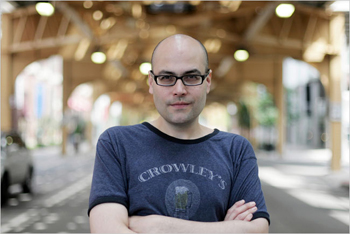 Nathan Rabin (born April 24, 1976) is a film critic based out of Atlanta and former head writer for The A.V. Club, the pop-culture sister site of The Onion. Rabin famously coined the term Manic Pixie Dream Girl in his review

of Elizabethtown, and to a lesser extent,

Rabin's main contribution to the site, beyond criticism, is his long-running My Year of Flops

feature, which he describes as "a leisurely stroll of cinema's biggest commercial and critical disasters, with an eye towards singling out unfairly maligned winners (like, say, Joe Versus the Volcano or Ishtar) and great scenes in otherwise middling movies." After 199 installments, My Year of Flops ended and was repurposed as My World of Flops

, allowing Rabin to delve into notable failures in other non-film media (though he still did films as well), thereby offering him a wider range of subject matter to pontificate upon. The feature ended after 36 installments due to his departure from the A.V. Club.

More recently, he has taken to music criticism, applying the My Year of Flops formula to the NOW! series of bestselling Nothing but Hits pop compilations in a series called THEN That's What They Called Music

Rabin's autobiography, The Big Rewind, was published in 2009. A book based on My Year of Flops (which has long since passed the single year that Rabin planned for the feature to last, and was later relaunched as My World of Flops covering all types of media) was released in 2010. Through The A.V. Club, he is one of many co-writers of Inventory, which compiles over 100 lists.

Rabin was one of six longstanding A.V. Club writers (including editor in chief Keith Phipps and film editor Scott Tobias) to leave the site between late 2012 and Spring 2013, for Pitchfork Media's film website The Dissolve. He continues to look for failed flicks in "Forgotbusters"

, which compiles movies that were successful in their own time, and grossed enough for the yearly top 25, but have either worsened their reputations or been forgotten. Around May 2015, he left The Dissolve and went freelance, writing for websites like Slate and Cracked and even restarting My World of Flops in June 2015. He also continues to search for cinematic oddballs in Decider's Absolute Beginners

"an ongoing column devoted to movies streaming online that movie stars and top directors made before becoming household names," and Rotten Tomatoes' Sub-Cult

, "a series devoted to weirdly infectious cinematic oddities on the cusp of becoming the cult films of tomorrow."

, which features various pop culture columns and features. Following The A.V. Club's cancellation of My World of Flops the next month, he announced

the column would be continuing on Happy Place. In addition, he and Clint Worthington have started the Travolta/Cage project, taking a chronological look at the careers of John Travolta and Nicolas Cage, starting with a podcast with a pair of books about the actors planned for the future.

Films featured in My Year of Flops include:

Films featured in My World of Flops include:

Other media featured in My World of Flops include:

Films featured in Forgotbusters include: