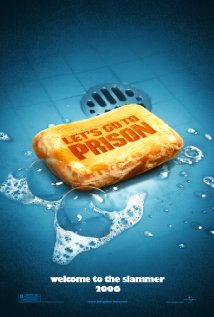 Let's Go to Prison is a 2006 comedy film starring Dax Shepard, Will Arnett, Chi McBride, Michael Shannon, Dylan Baker, and David Koechner. The movie was loosely based on the non-fiction book, You Are Going to Prison by Jim Hogshire.
Advertisement:

Since John Lyshitski (Shepard) was eight, he's been in and out of prison, all because of one man—Judge Nelson Biederman III. (Well, okay, it's mostly his own fault, but Biederman's sentences are indiscriminately harsh.) Lyshitski plots his revenge while completing his third sentence, only to find out that Beiderman died three days prior to Lyshitski's release. So, to get revenge on Biederman III, Lyshitski decides to get the obnoxious rich-kid Nelson Biederman IV (Arnett) framed for theft. It works, mostly due to Biederman's lawyers intentionally sabotaging the case, and Lyshitski gets himself locked up in the same prison to ensure that Biederman has the worst time possible.