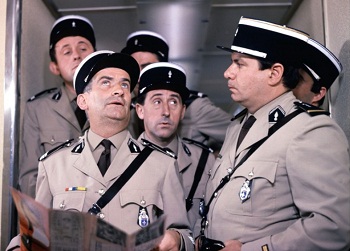 A Group of Fishes out of waternote Or in that case, Frenchmen out of water
Advertisement:

The gendarmes of Saint-Tropez are invited to New York City for a law enforcement conference. Cruchot's daughter Nicole badly wants to go with them, but her father forbids her. She still decides to go, as a clandestine passenger.