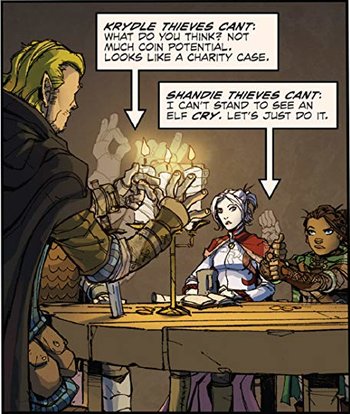 Newscaster: The spike claimed she would use the peg as a snap with palliads; the nabbed cove says the doxy will meet the chats.
Translator: Sorry, no idea on that one.
— Horrible Histories, "News in Tudor Criminal Slang"

Being in crime is risky business. Just going about a dishonest day's work can land in you in prison, banished, or even with your neck in a noose (or worse). And since you never know who's affiliated with the police, or who's interested in the reward you have posted on your head, it's in your best interest to keep things secret, even from those who might overhear you.

Enter the Thieves' Cant, a secret language used by such lowlifes to go about their daily "business" without being caught. The language can range from elaborate slang lexicons to entirely different languages unrelated to those spoken by the everyday folk. The Trope Namer is the Real Life Thieves' Cant

(also called "Rogues' Cant" or "peddler's French"), which was used by criminals, beggars, and others on the fringe of society in Great Britain for some time; similar cants were present throughout Europe. This history is probably why such cants are prevalent in Medieval European Fantasy, though they show up elsewhere as well.

This cant is often the working language of a Thieves' Guild. If you don't know cant, you "cant" get in.

If characters are trying to infiltrate the criminal underworld, or require their assistance, expect knowledge of cant to be a prerequisite for gaining anyone's trust. A character with a criminal past will often be revealed to be fluent in cant; this can be used as a way to introduce his criminal history as well. In many games influenced by Dungeons & Dragons, the common Thief class will have a specific Thieves' Cant language usable only by that class.

Related to Spy Speak, which is simply speaking in code, as opposed to using new vocabulary and languages — though criminal Spy Speak may well evolve into Thieves' Cant should it catch on with others in the criminal world.