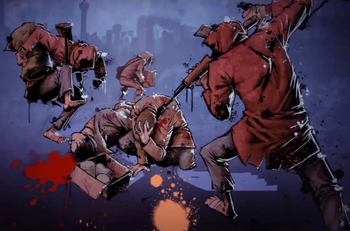 "The Reapers. Before the blast they were just a bunch of junkies dealing drugs. Now they own the Neon District, taking whatever they want."
Advertisement:

In a Gangster Land, there's the Neighbourhood-Friendly Gangsters and then there's these. These are not your Neighbourhood-Friendly Gangsters, where crime syndicates treat the inhabitants inside their areas with at least some respect. Instead, they are just as violent towards the civilians in their areas (and any civilian that accidentally crosses their path), treating them just like a rival crime syndicate.

In many cases, they would have some form of a de-facto Police State that watches over the neighborhood (or sometimes a Secret Police), Fascists' Bed Time in the form of violent crime overnight, The Aggressive Drug Dealer-styled drug enforcement or even forced Conscription into the gangster ranks. Sometimes said Police State would overlap with State Sec, if said crime syndicate is very close to the enforcers. Professional Killers would be commonplace in the area. In more severe cases, they would become an N.G.O. Superpower, rivaling the government in military power (or even being able to overpower it). Needless to say, these types of gangs may be seen as just as bad, if not worse than police corruption. Sometimes, the civilians would either become The Informant, (minus the criminal part) or actively try to rebel against the syndicate. When the civilians do try to rebel against the gangs, if they do suppress it, then they would crush the populace or even resort to a Final Solution.

If a Mob War happens around this, expect it to be a case Evil Versus Evil.

See also Vice City, Caught in the Bad Part of Town and The City Narrows. Compare with Taking Over the Town, Gangster Land and Wretched Hive. Compare and Contrast Ruthless Foreign Gangsters, in which it's the Crime Syndicates outside the area that are being ruthless and N.G.O. Superpower, in which although it does mean non-governmental organizations rivaling governments, doesn't just refer to Crime Syndicates. Could be the result of an Anarcho-Tyranny, where the tyrannical government deliberately lets the gangs have their way in specific parts of the country.