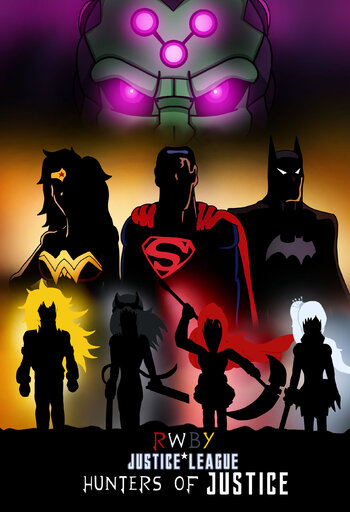 A crossover of RWBY and The DCU by trestwho. The story starts during Season 3 of RWBY when Brainiac decides to "learn" about the cultures of Remnant, a.k.a. shrinking all its major cities and destroying the rest of the planet. Team RWBY and JNPR manage to escape and arrive on Earth, where the hopes of the people of Remnant now lies in their hands and the gods that now walk among them.

In which Remnant falls to Brainiac, its cities captured and held hostage in his hands purely to satisfy his twisted curiosity. Fortunately, two teams of students, Beacon's RWBY & JNPR, are whisked away to another world: Earth, home to some of the universe's greatest heroes.

The story can be read at Spacebattles

It later inspired the Recursive Fanfiction Remnant's Mightiest Heroes which features the same basic premise, but with Marvel and replaces Brainiac with Kang the Conqueror.

Tropes contained in Hunters of Justice include the following: