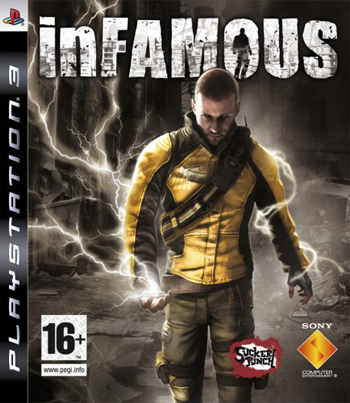 And Spider-Man thought he had great responsibility...
"The explosion changed my life...and ruined everyone else's. Empire City is overrun with criminals and lunatics. Cut off from the world...by a government quarantine. Everyone thinks I have the power to fix it, but I don't know if I can...or if I even want to."
— Cole MacGrath, in the game's commercial

inFAMOUS is a 2009 PlayStation 3 Action-Adventure Wide-Open Sandbox Superhero video game developed by Sucker Punch, of Sly Cooper fame. The game is notable for its Karma Meter, which gives free rein to shape your story and how citizens react to you: Be a superhero who helps the people through catastrophe, or a supervillain who just wants to watch the world burn. Your superpowers will also develop differently depending on your morality, with some abilities functioning in new ways depending on if you’re "good" or "evil", and others being entirely exclusive to each path. The game also feature Roof Hopping gameplay that lets you get through the city by climbing buildings and traversing rooftops.

Cole MacGrath, an average-joe bike messenger in the New York stand-in of Empire City, gains a set of powers from an artifact called the "ray sphere" in a package he was delivering, gets trapped in due to a crime filled quarantine against a plague and gets ordered to find the ray sphere from a government agent, while a man named Kessler watch every one of his moves and tells him about a mysterious being known as "the beast". Cole must find the ray sphere while fighting against Kessler's minions.

Cole MacGrath also appears as a Guest Fighter in the PlayStation 3 and Play Station Vita versions of Street Fighter X Tekken and in both his good and evil incarnations in PlayStation All-Stars Battle Royale.

No connection to the 2020 crime thriller movie.

Example of:
Dying Declaration of Hate