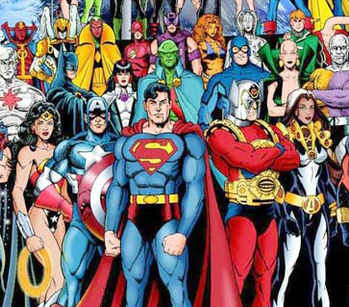 For a list of tropes common to the genre, see Superhero Tropes.
Advertisement:

A series where the main character has powers and/or abilities that set said character apart from other people. Usually (unless Not Wearing Tights) a costumed do-gooder with a colourful outfit (which likely sports a Chest Insignia), a Secret Identity and often unusual and useful superpowers or equipment. Sometimes a loner trying to deal with the hand dealt by fate. Usually the superhero’s reason for existence is to defeat their nemesis or Arch-Enemy, the Supervillain. Sometimes the show focuses on a team or other grouping of powered individuals. The setting tends to favor a combined Fantasy Kitchen Sink and Sci-Fi Kitchen Sink with a merry indifference to coherence.

In a broader sense, superheroes can be considered as old as the superhuman heroes of ancient mythology, with Gilgamesh being the Ur-Example. Other examples include Hercules, Perseus, Krishna, Samson, Hanuman, and Sun Wukong (a.k.a. Son Goku). In classical times, that's what being a "hero" meant; it was a statement on a demigod's power, not necessarily their actions. Only later did heroism come to be associated with moral purity, becoming the modern superhero.

(debuted early 1930s), and The Shadow (first published April 1, 1931 in The Shadow Magazine, years before Action Comics #1 introduced Superman). Nyctalope was a cyborg with built in night vision. Golden Bat was the first illustrated superhero, and the first with all the Flying Brick ingredients of the modern superhero: Super Strength, Super Speed, Flight, The Cape, X-Ray Vision, Bat Signal. Prince of Gamma had superpowers, a Secret Identity, and an origin story resembling Superman and Goku. Though The Shadow did not initially have have super powers other than being a master hypnotist, he gains psychic abilities beginning in 1937 that let him induce psychological

in the radio series. He was inspired by previous fictional adventurers and crime fighters, such as The Scarlet Pimpernel or Zorro (who may be the Ur-Example). In turn, he has inspired many future superheroes, most notably Batman who was a blatant Expy at first before becoming the character we recognize today.

The first comic strip superhero would have been Mandrake the Magician (June 11, 1934) and the first spandex-type costumed Super Hero is arguably The Phantom (first published Feb. 17, 1936), who wore a skin-tight purple outfit with a mask. The Trope Codifier is arguably Superman, who remains doubtlessly the world's most recognized superhero character and the Trope Codifier for countless future superhero stories; similar characters that came before are often classified as a Proto-Superhero. After Superman's debut, the concept was repeated numerous times, eventually spawning the Justice Society of America which was the first superhero team.

Note that not all superheroes are super-powered; Batman is often considered a superhero despite having nothing but insane training, incredible intelligence, indomitable willpower, amazing gadgets, nigh-unlimited wealth and the writers on his side; Phantom is in peak physical fitness, has excellent reflexes and is a sharpshooter. They are generally considered superheroes, partly because of the costume. In trope terms, they go under Non-Powered Costumed Hero.

Sooner or later, all superheroes have an origin story. If the series lasts long enough, the Sorting Algorithm of Evil will introduce the bigger threat of a Supervillain, possibly an Arch-Enemy. If the superhero fights enough of them often enough, they may gather a Rogues Gallery.

Superheroes are not limited merely to comic books and their derivations. Gladiator, Golden Bat, Prince of Gamma, The Lone Ranger and The Green Hornet predate all comic format superheroes. The Six Million Dollar Man and Doctor Who originated on TV, with the former partaking in fairly little of the comic book medium. On Japanese television, the tokusatsu has a long and proud tradition of superheroism, most famously Ultraman and Kamen Rider, serving as the national image of superheroes. Anime is also chock full of superheroes from Astro Boy to Sailor Moon; Sentai and Magical Girl Warrior are two Japanese genres that are an outgrowth of this, not to mention Super Robot, which is a gigantic, armored variant of the superhero.

In some continuities they may be called something other than superhero, but they're usually still recognizable as such. See also Superhero Prevalence Stages and Standard Superhero Setting.

See also The Cape, Stock Superpowers Index, Form-Fitting Wardrobe, and of course the Most Common Super Power. The exact opposite would be the Un-Sorcerer.

If you feel you have a handle on the elements of a superhero comic book, hop on over to So You Want to Write a Superhero Comic and see what you can contribute.