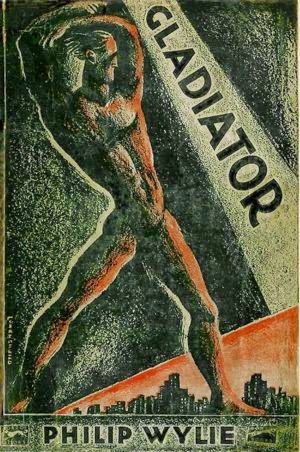 Too weird to live, too rare to die.
Advertisement:

A novel written in 1926 and published in 1930 by Philip Wylie, not to be confused with the 2000 movie of the same name. Not great literature, but truly genre-making. The story of Hugo Danner, whose professor father experimented on him as a fetus, so that he developed a reasonable degree of Invulnerability and Super Strength. The plot is mainly concerned with Danner dealing with his singular condition as he attempts to find a useful place in society, which turns out to be harder than you'd think.

He suffers the guilt of killing another player on the field while playing football, leading him to drop out of college. He gets a job in a bank, but finds he has to save a man who will suffocate inside a safe. He rips the safe open, leading his employers to attempt to find out how he managed it through (ineffectual) torture and ultimately resulting in him losing his job. He has another job as a manual laborer, but loses that because he's making the other workers look bad. He finds some use for his abilities in World War I, and is about to attempt to end the war single-handed when it ends of its own accord. He is ultimately appalled by the whole experience. Eventually, while helping on an expedition amongst the Mayan ruins, he takes the expedition leader into his confidence. They discuss the possibility of creating more people like himself, to be used to improve the world. Deeply concerned with the possibility, he stands on a mountain in a storm and asks God to judge. God provides his answer.

This work is mainly significant because it may be the first modern depiction of a superhero, and seems to have been a great influence on the story of Superman and Doc Savage. It also provides part of the backstory of "Iron" Munro from The Young All-Stars.