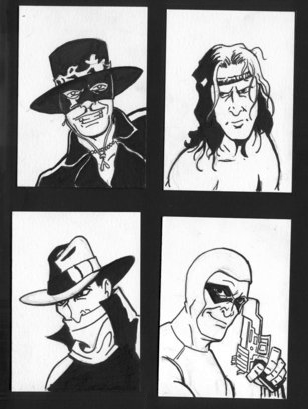 Zorro, Tarzan, The Shadow and The Phantom.
"I've never told anyone this... but you were my biggest inspiration. I'd be honored to shake your hand."
— The Caped Crusader to The Shadow, Batman #253

While the deeper roots of the Superhero can be traced back for millennia, with superhuman warriors such as Gilgamesh populating ancient mythology and vigilantes like Robin Hood numbering among many cultures' great folk heroes, the codification of the superhero genre had to wait until the emergence of commercial fiction. Only when word-of-mouth storytelling gave way to mass-market publication did the iconic themes and qualities that make a "superhero" captivating - impressive and extraordinary abilities, secret and/or outlaw identities, defense of others without need for reward - prove appealing (and marketable) enough to meld together into a new archetype: heroism, re-imagined for the modern age and audience.

With Action Comics #1 and its introduction of Superman (June 1938), these new heroes would find their lasting home in comic books. But prior to this emergence of The Golden Age of Comic Books, earlier prototypes of the genre had to blaze the trail via a wider range of media: penny dreadfuls, pulp novels and magazines, Radio Dramas, newspaper Comic Strips, and stage plays all preceded the explosion of comic books in the 1930s. The heroes of these works, whose adventures set the stage for the Golden Age, weren't always as completely "super" as their successors, but such prototypes demonstrate the transition by which age-old heroic folktales gave way to our contemporary genre of commercial superhero fiction.

Of the characters that arose during this transition, most have faded from the popular imagination. The Golden Age's superhuman heroes tended to overshadow their predecessors, who seldom boasted more than a Charles Atlas Superpower or a signature gadget to their advantage. (See also: Non-Powered Costumed Hero.) Only a lucky handful (Zorro, Tarzan, The Shadow, The Phantom, The Lone Ranger, Golden Bat) have remained popularly-recognized since their inception. But superpowered or not, widely-remembered or not, it's these Proto Superheroes to which later Golden, Silver, Bronze, Dark and Modern Age comic superheroes owe their success, as inspiration for their archetype and the industry that birthed them.