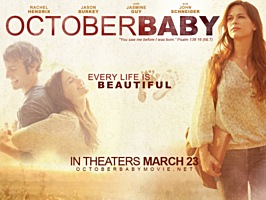 The story concerns Hannah (Rachel Hendrix), a 19-year-old college student who learns from her parents Jacob (John Schneider) and Grace (Jennifer Price) that not only was she adopted, but also an abortion survivor. This shakes Hannah to the core, prompting her to go Gene Hunting with the help of her friend Jason (Jason Burkey). The film, despite receiving a limited release, has made a splash with conservative Christian audiences, in part due to its pro-life stance and religious elements. Mainstream reviewers and audiences, on the other hand, balked at the film, with some calling it exploitative and dangerous in its message.

Tropes found in October Baby include...