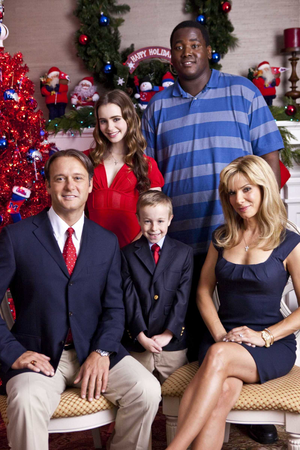 The Tuohy Family. Clockwise from bottom: Sean "S.J." Touhy Jr, Sean, Collins, Michael, Leigh Anne
Spyro: So... you mean I— I'm not your real son?
Nina: You are our real son. It's just that you came from somewhere else.
— The Legend of Spyro: A New Beginning
Advertisement:

Once upon a time, being an adoptee was a raw deal. Either your adoptive or foster parents were Muggles—caring, but utterly, utterly clueless—or they were downright abusive, presumably because you weren't their "blood." If it wasn't adoptive parents, it was step-parents. Either you went Gene Hunting, found your REAL parents, and were loved for the rest of your life, or you moved out, lived on your own, and promptly forgot about them. Even if your adoptive parents were fairly harmless, if you ever found your real family, you forgot all about the people who raised you. Blood's thicker and all that, right?

Or so it used to be.

Because there are some problems in implying that adoptive parents are either bad (in the Abusive Parents variety) or unnecessary/useless (the Gene Hunting variant), many adoptees have a better deal. They're adopted. They know they're adopted — if not right off the bat, then it gets revealed to them that they are. Their reaction is... not to care. Oh, sure — maybe they care at first. Maybe they spend some time wondering about their birth parents, their origins, and where they really come from, but after some thought, they come to one conclusion: No matter who they were born to, they know who cared for them when they were sick, who helped them when they were down, and, most importantly, who loved them. When love's in play, the truth becomes obvious: Those who love them are their real family, blood be damned. Usually, the kid will eventually tell the parent that, throw in a hug and Heartwarming Moments are made as their bond grows stronger.

What happens in cases where the child in question is a Wonder Child, and has celestial or other fantastic parentage? While in older works, the Muggle Foster Parents would frequently be forgotten about, in this trope, the child tends to accept both sets of "parents" as being real. If the child is a Heartwarming Orphan whose "original" parents died, the same thing may also apply. Thus, this has often become a component of the modern Happily Ever After: What will happen to the orphan child protagonist? He/she gets adopted by the adult good guys! Everybody is happy!

Truth in Television (thankfully), but No Real Life Examples, Please!.

Can be an application of Nurture over Nature.

The counterpart trope to Adoption Is Not an Option and Adoption Angst.

Kids Raised by Wolves are often happy adoptees. Compare with Babies Ever After. Contrast Raised by Orcs and First Father Wins. See True Companions, which is closely related (by adoption, of course). An Adoption Diss might be used against these characters for Kick the Dog purposes if it's clear to the audience that this trope applies. Also see Orphan's Ordeal for the flipside of the coin.

Upon being transfurred into a hyena by the large hyena, she has no qualms adopting the former human as one of her children.

Upon being transfurred into a hyena by the large hyena, she has no qualms adopting the former human as one of her children.