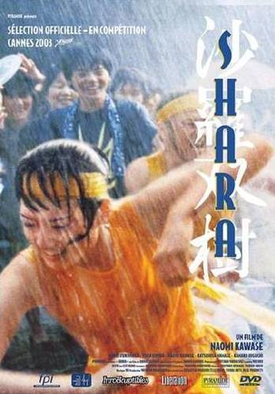 Shara (沙羅双樹) is a movie by documentary and art-house film director Kawase Naomi, and released in 2003. It tells the story of a Japanese family living in Nara, once the capital of Japan. Kei and Shun, two twin boys, play in the street, when Kei suddenly disappears without a trace, as though he had been "abducted by the gods". The story jumps to five years later: Shun is now a teenager; the father involves himself in the preparation of the Basara Matsuri, a street festival in honor of the Bodhisattva Jizo; and the mother is about to give birth to another child. Shun and his classmate Yu share a mutual attraction, but can't bring themselves to admit it to each other.

As the date of the festival approaches, Kei's body is finally found, enabling the family to grieve and experience closure. Meanwhile, Yu learns the secret of her birth. When the festival takes place, it is an opportunity for release and the primal celebration of life. The next day, the mother gives birth to her third child.