Theatre / The Shape of Things 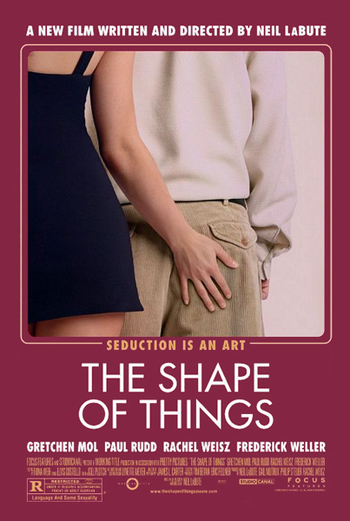 The Shape of Things is a 2001 play by Neil LaBute. It was adapted into a film in 2003, directed by LaBute and featuring the original London stage cast, which included Paul Rudd, Rachel Weisz, Gretchen Mol, and Fred Weller.

When Adam Sorenson (Rudd), an English literature major at Mercy College, meets Evelyn Ann Thompson (Weisz), an attractive graduate art student at the local museum where he works, his life takes an unexpected turn. Soon after they begin dating, Evelyn begins to prod the schlubby Adam to make dramatic lifestyle changes for the sake of his physical appearance. Immediately, Evelyn's abrasive personality puts her at odds with Adam's friend and former roommate Phillip (Weller) and Phillip's fiancée Jenny (Mol), but Adam, unlucky in love up to this point and flattered by the attention, decides to do whatever it takes to keep Evelyn in his life.

This play/film provides examples of:

Alternative Title(s): The Shape Of Things