Film / The Shape of Water 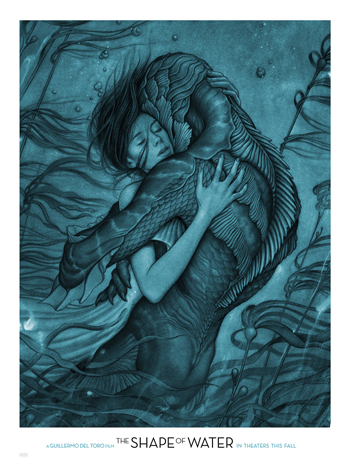 J'avoue j'en ai bavé, pas vous, mon amour?
Avant d'avoir eu vent de vous mon amour.
"Water is like love, it has no shape. It takes the shape of whatever it inhabits. It's the most powerful element in the universe. It's gentle, flexible, but breaks through every barrier."
— Guillermo del Toro
Advertisement:

The Shape of Water is a Fantastic Romance film set during the height of the Cold War, directed by Guillermo del Toro and written by del Toro and Vanessa Taylor. It premiered at the Venice Film Festival in August 2017 where it won Leone d'Oro and screened at the Toronto International Film Festival in September 2017. It was released in the US December 1, 2017, and in the UK in February 2018.

The year is 1962 and the Cold War is raging on. Elisa Esposito (Sally Hawkins) is a mute janitor who works in a government laboratory with her colleague Zelda Fuller (Octavia Spencer). One day, she discovers what her superiors call "the Asset" (Doug Jones): an amphibious humanoid creature confined to a water tank. Elisa, out of loneliness, fascination, and sympathy for its torture at the hands of head security officer Richard Strickland (Michael Shannon), befriends the creature.

But the friendship may very well become something more than just that...

The Shape of Water contains examples of: