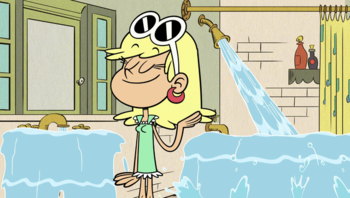 When the water bills are the least of your concerns.
Advertisement:

Sometimes a member of the family, a housesitter hired to watch the house, or even both, end up doing something so stupid that it results in the house (usually ground floor) being flooded to the knees of an adult. It's commonly a source of comedy. Bonus points if they don't show how they did it, and it starts with a phone call focusing on the face of the caller before panning back to reveal the flood.

In some cases the flood wil be temporarily confined to a single room, despite the fact that the doors & floor of a regular house aren't built to be watertight. This is likely to result in Opening the Flood Gates when some poor sap tries to figure out what's going on.

The bathtub and sink versions of this trope are gradually becoming discredited: modern tubs and sinks now come with an overflow pipe built into them that connects to the drainpipe in order to prevent this sort of thing from happening. It isn't standard however, so for now it remains delightfully feasible.