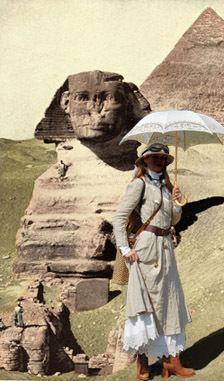 Spoiler note: While most troping involves spoilers to a certain degree, this page as it's currently laid out has major mid- to late-series arc spoilers out in the open! If you hate having your mysteries spoiled, stop reading after the next couple of paragraphs. You have been warned!

Amelia Peabody and her husband Radcliffe Emerson are Happily Married Victorian Egyptologists. They are also Amateur Sleuths. They also have a tendency to consider themselves above the law, in that they don't often bother to call the police while battling criminals, as the Police Are Useless. Amelia, in fact, is generally scornful of cops, ignoring the fact that police must follow rules of evidence she doesn't consider binding on her. She frequently says Scotland Yard would solve more cases if a woman ran it — not talking about getting both male and female perspectives, but about replacing the male way of thinking with the female.

The Amelia Peabody series starts in the Victorian Britain but runs through World War I and into The Roaring '20s, so far. Over this time, she and her husband have founded a Badass Family and Quirky Household, the Emersons, that is the core of a bi-ethnic (English/Egyptian) example of The Clan. In addition to Peabody and Emerson, the Emerson family includes:

Each of these four main characters has an Egyptian nickname, bestowed on them by the locals, a particular interest within Egyptology, and an edge of some kind that makes them a bit super-normal:

The main characters complicate their investigations for themselves by (1) sometimes competing to see who can solve it first, and (2) almost always keeping information from each other to protect the others from rushing into the danger that they themselves feel must be investigated. As a result, they spend a lot of time rescuing each other.

There are a great many repeating characters, including many historical archeologists. Among the important supporting characters are:

The Emersons, both female and male, are also fierce proponents of equal rights for women. Some of the stories touch on the early feminist movement in England, and Amelia and Nefret are always trying to improve the lot of Egyptian women.

The Emersons' career is intertwined in the real history of Egypt and Egyptian archeology. The latest books put them on the outskirts of Carter's discovery of the tomb of Tutankhamen.

The Amelia Peabody books, with the dates when they are set, are: