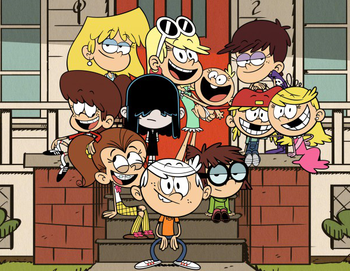 "One boy and ten girls, wouldn't trade it for the world!"note Clockwise from top left: Lori, Leni, Lily, Luna, Lana and Lola, Lisa, Lincoln, Luan, Lucy, and Lynn.
"Surviving in a big family can be challenging, but it's not impossible."
— Lincoln Loud
Advertisement:

The Loud House is an animated series created by Chris Savino that premiered on Nickelodeon on May 2, 2016. It was the second Nicktoon to stem from the network's internal shorts program.note You can see the pilot for the series here.

Based on Savino's own childhood of growing up in a large family and influenced by his love of Newspaper Comics, the series follows the adventures of Lincoln Loud, the middle child in a family of eleven kids, having five older sisters and five younger ones, living in the suburban town of Royal Woods, Michigan. Simply put, think Cheaper by the Dozen (or the In Name Only film) as a cartoon. Following the first season, the series would go on to expand past Lincoln and have more stories centered on other members of the family. By the fifth season, the series' Floating Timeline has broken and the Louds have all aged by one year.

In October 2017, Nick fired Savino amid numerous allegations of sexual harassment and intimidation towards fellow artists, and it was announced that the show would continue to go on without him.note This is the second time in Nicktoons history that a creator was fired from their own series; John Kricfalusi was famously ousted from The Ren & Stimpy Show in 1992, albeit for purely business reasons. In March 2018, it was announced that story editor Michael Rubiner had become the new series showrunner, effective in Season 4.

Not to be confused with the Carrier Dome

(affectionately nicknamed "the Loud House" due to how loud it can be inside), a domed stadium at Syracuse University in New York that hosts the school's football, basketball, and lacrosse teams.

The show has a recap page, and a Best Episode Crowner

The Loud House provides examples of:

Example of:
Let's Just Be Friends