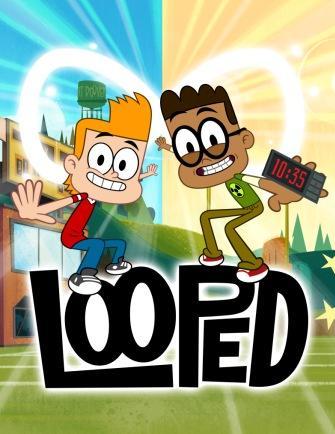 They're having fun 'cause life's a rerun.
Advertisement:

Looped is a Canadian animated series created by Todd Kauffman and Mark Thornton, who have also worked on many other Canadian cartoons, like Total Drama, Sidekick, and Grojband (the last of which they also created together). Produced by Kauffman and Thornton's very own Neptoon Studios and DHX Media, the showmade its world debut in January 2016 on the Latin American Cartoon Network and CITV in the United Kingdom, later coming to its home country that August on Teletoon, running for only only 26 episodes. It was also shown on Amazon Prime Video in the United States.

This show is about the adventures of two elementary school boys named Luc and Theo, best friends from the town of Port Doover who also happen to be stuck in a time loop where it's always Monday, October 12th (thanks to accident involving an invention made by Theo in Luc's shed). Since the events of that Monday are on constant repeat, the two boys know everything that will happen in Port Doover and exactly where and when it will happen right down to the second.

Due to the fact that nobody else is aware of their timey-wimey predicament, Luc and Theo use their knowledge of their environment, their teachers and classmates at Port Doover Elementary, and fellow townspeople as an opportunity to do whatever they want, especially if that "whatever" is something that would get them in trouble. Hilarity Ensues as the boys make the most of their eternal cycle of Mondays, get into all manner of wacky hijinks, and occasionally have to solve errors in the loop caused by their antics.