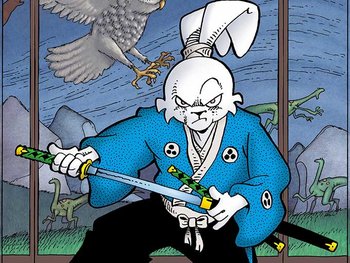 Bugs: I like your hair.
Lola: Thanks, heh. They're my ears.
— The Looney Tunes Show
Advertisement:

Lots of media stars Funny Animals, and as we all know, some animals have rather long ears, such as rabbits and various breeds of dogs. In nature, these ears serve the purpose of enhancing hearing or regulating body temperature, but once you put an animal on two legs, the ears serve a different purpose. Very often, Funny Animal characters will treat their long ears as if they were hair. Braiding a real animal's ears would hurt immensely, but Funny Animals seem to have no problem with it.

This trope is especially common with female animals. It most often occurs in Civilized Animal, Funny Animal, and Beast Men, but can show up in animals on any level of the Sliding Scale of Anthropomorphism.