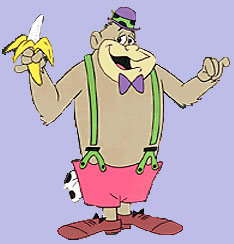 Created in 1964 by Hanna-Barbera, Magilla Gorilla lives in Peebles' Pet Shop. Magilla occasionally gets sold, but the purchaser always returns him, or he flees the purchaser back to the safety of the pet shop. There's one person who'd love to have him for a pet — a little girl named Ogee, who only has a penny, and parents who really don't want a gorilla in a house.
Advertisement: