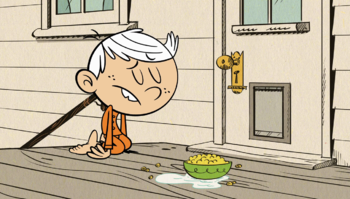 ”I guess I brought this on myself.”
Lynn: We're officially the worst siblings ever.
Leni: Poor Lily. She'll probably grow up super gloomy, dress in black, and listen to sad music all the time.
— "The Crying Dame"

Wait, you thought The Loud House is not too sad enough because it’s a slice of life show? Think again!

Left in the Dark

Along Came a Sister

For Bros About to Rock

A Fair to Remember

One of the Boys

One Flu Over the Loud House

L is for Love

Do Not Fore-get About Me